The SSC Admit card for SI/ ASI Exam 2015 Paper I & Paper II Written Test Admit card 2015, has been issued by Staff Selection Commission. The SSC CPO SI/ ASI Paper-I written test is going to be conduct on Sunday, 21 June 2015 by SSC, Government of India. The paper II exam date will be decided by SSCRecently SSC has issued the Recruitment of Sub-Inspectors in Delhi Police , CAPFs and Assistant Sub-Inspector in CISF Recruitment notification, 2015. There are lakhs of candidates applied for SSC SI/ ASI Recruitment 2015 from different states in India, all of them suggested downloading your hall ticket to appear in your exam hall. Candidates are advised to keep your hall ticket with you when you are going to examination hall. 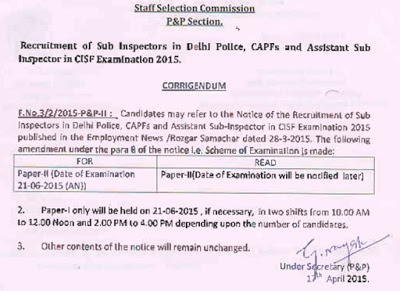